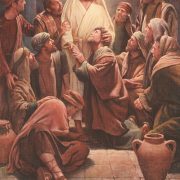 Series: Between Resurrection and Ascension

Still later he appeared to the eleven disciples as they were eating together. He rebuked them for their stubborn unbelief because they refused to believe those who had seen him after he had been raised from the dead.

Then the eleven disciples left for Galilee, going to the mountain where Jesus had told them to go. When they saw him, they worshiped him—but some of them doubted!

And then he told them, “Go into all the world and preach the Good News to everyone. Anyone who believes and is baptized will be saved. But anyone who refuses to believe will be condemned.

Jesus came and told his disciples, “I have been given all authority in heaven and on earth. Therefore, go and make disciples of all the nations, baptizing them in the name of the Father and the Son and the Holy Spirit. Teach these new disciples to obey all the commands I have given you. And be sure of this: I am with you always, even to the end of the age.”

The Essential Value of Scripture
Scroll to top